Day One of my Kubernetes Course

I’ve been a developer for about 5 years now. It’s been a slow process but I think I’m in a good place right now.

I’ve always loved writing code but there has always been something missing. I am a decent programmer and I can get work done, but I’m starting to feel less and less fulfilled by it.

I’ve kind of taken an interest in moving to the DevOps “side-of-the-house” if you will.

I enrolled in the “Kubernetes Fundamentals” course and together with that I also bundled it with the Certification.

The Linux Foundation is a respected organization and it will be nice to have something I can show off for once. You see, I don’t have a fancy degree. I’ve never worked, (and probably will never work), at Google, or Facebook, or Twitter, or Microsoft. Not that the lack of a degree has ever bothered me.

Now the really cool thing is that I DON’T HAVE ANY CERTIFICATIONS. So this would be my first. I’m very excited about it and DevOps lately has been all I can think about.

I got home from work at about 5:45pm and cooked dinner for my family and then I retired to my study…to study. There were some setup materials included with the course so I watched a 10 minute video on how to setup a Google Compute Engine instance. 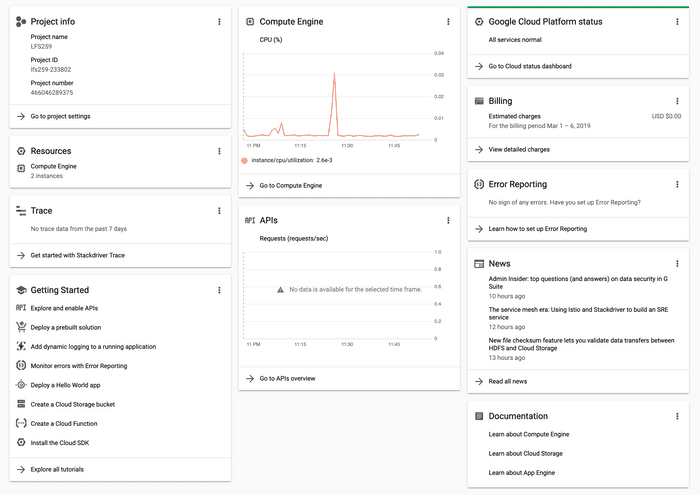 I have two VMs running with 2 CPUs and 7.5GB RAM each. Apparently, they need to be this size so that they’ll run smoothly. We shall see.

I got the two VMs up and then I had to add SSH Keys for the three computers that I will be accessing the server with. That part was not as bad as I thought it would be. Just a matter of generating the keys, then pasting the public key into the Google Cloud console.

The next step was to install Ubuntu on my MacBook Pro using Parallels. I got everything installed, setup some settings real quick and then I was able to generate SSH keys and login to my Google Compute Engine instances. A pretty neat coincidence is that my server’s IP addresses end in 64 and 86 so it’s pretty easy to remember which is which. (ie 64 as in 64bit and 86 as in x86 architecture).

After I got the VMs setup and could login I started going along with the course. There was one short 2 minute video and then a TON of text. The first two chapters dealt with a bit of history of Kubernetes and then setting up a few things on the servers. I made sure sudo was working correctly, set my user password and the root password using the:

to my .bashrc file so that when I’m using sudo or my user account they both look at the same files and programs and I don’t have to keep using the full path when I’m “Sudoed Up”.

Ill be starting Chapter 3 tomorrow which involves installation and configuration of Kubernetes on my two servers. Oh, and the reason there are two servers is because I guess one will be the “master” which will have Kubernetes installed on it and the other one will be a “worker” that will do…something awesome TBD.

I guess I’ll find out tomorrow. After I get home from my J.O.B. of course.

Thanks for stopping by. Have you ever gotten interested in Kubernetes or potentially switching to DevOps from development? Let me know in the comment section. 👍